Wherever You Go: A Novel by Joan Leegant 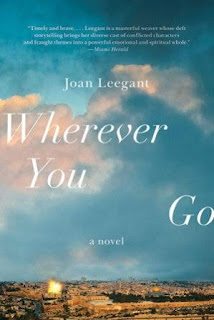 In this sweeping and beautifully written novel, Joan Leegant weaves together three lives caught in the grip of a volatile and uncompromising faith.  Yona Stern has traveled to Jerusalem from New York to make amends with her sister, a stoic mother of five dedicated to the hard line West Bank settlement cause.  Mark Greenglass, a gifted Talmud teacher and a former drug dealer saved by religion, has lost his passion and wonders if he's done with God.  Enter Aaron Blinder, an unstable college dropout with a history of failure who finds a home on the radical fringe of Israeli society.  Emotionally gripping, timely and prophetic, Wherever You Go tells the story of three Americans in Israel and the attractions - and dangers - of Jewish religious and political extremism.

I've just finished this book and so the story is still fresh in my mind.  I still have Yona's voice in my head and can picture Greenglass' broken body lying in the hospital bed, all the while I want to strangle Aaron for everything he's done.  To me, feeling so much emotion for these characters is a sign that the book is good.  And it is good.  However, there were times when I found myself disengaging from the story, because the flow became disrupted or the pace slowed down and the story veered off into a direction that was less than compelling.  I suppose my main problem with the novel was the narrative structure.  There are three main characters (Yona, Greenglass, and Aaron) and each of their stories is told via alternating chapters.  So, we get a distinct shift in perspective each time we begin a new chapter.  Now, I've always enjoyed reading a book that utilizes this style of narrative, because I think it helps provide a better understanding of each character.  However, with this book,  I didn't get that feeling.  I just found that as soon as I became immersed in Yona's story, I would be  thrown into Aaron's story, which I didn't find as interesting (at first), and it would put a damper on my enjoyment of the book.  Each character was so well developed and their story was so real and engaging that I didn't want to be interrupted.  In fact, I think that each character's story would be better told as a stand alone short story or novella - I would definitely enjoy reading about each one separately.

Aside from my gripe with the alternating chapters, I found the book to be really interesting.  The writing is great and the characters are unforgettable.  Themes of religion, family, atonement and love are explored throughout each character's personal story.  Yona wants forgiveness from her sister for a past indiscretion which has torn them apart.  Greenglass wants to find his passion for life and love and faith.  Aaron is lost and confused and finds himself plotting a horrific crime against innocent people.  All three characters are realistically portrayed and make for some very good reading (some more than others).  The tone and pace of the book does falter at times, but overall keeps the connection between characters and their stories linked rather seamlessly.  I do wish there was more to read, because I feel as if Yona, Greenglass and Aaron's stories aren't finished.  I want to find out what happens next in their lives - how have they changed as a result of their time in Jerusalem after the bombing? Will Yona finally open her heart to love? What part does God play in Greenglass' life now? And, will Aaron's act really go unpunished (I don't believe the deal he got is punishment)?  Oh well. I suppose I can just imagine for myself where their stories end.  All in all, I enjoyed this read.  I would recommend Wherever You Go to anyone and everyone.

Thank you to TLC Book Tours and the publisher for providing me with a copy of the book.

Posted by A Bookish Way of Life at 2:57 PM
Labels: Joan Leegant, Literary fiction, TLC Book Tours, Wherever You Go

I'm also on the tour and I'm aout to start the book. I'm glad that you enjoyed it overall even if there were a few quibbles.

Thanks so much for your close read and thoughtful review. I'm so glad you enjoyed the book. Best wishes, Joan Leegant

Pam, looking forward to reading your review of this book. Hope you enjoy it!

Joan, thanks so much for stopping by to read my review of your book. I truly did enjoy reading about Yona and Greenglass and really do wish you would have either written their stories longer or would write another book about them - they are such fascinating characters and your writing is terrific! Cheers!

I'm glad that you can recommend this book so highly in spite of the issues you had with the narration style. I'm really looking forward to reading it myself!

heathertlc, this book is really good, I think I was just so caught up in the stories at times that I wanted them to continue as one and not alternate. Either way, this is definitely a book I would recommend regardless of my quibble with it. Hope you like it! Thanks for having me on tour :)