About Scout Books and their American Shorts:


Scout Books is a small Portland, OR-based publisher, and they have just launched a new imprint: Good Ink.  The first series to come out of Good Ink will be titled, American Shorts. This series will pair ten classic American short stories with ten really great contemporary cartoonists and illustrators (including Vanessa Davis, Tom Neely, Aaron Renier, and Gemma Correll).  What a great way to add a fresh and modern take on some of American's most unforgettable classics!  Plus, it'll bring attention to ten amazing short stories!

Here are some the American Shorts I read: 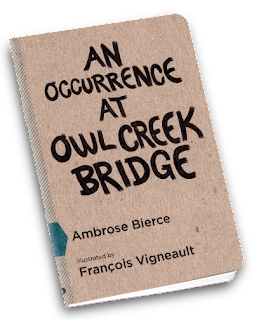 This story is about a man named Peyton Farquhar who has been condemned to death by hanging.  As he stands over the edge of the bridge contemplating his life and family, we read about the events that have brought Peyton to this death sentence.  We learn about the plan for sabotage and how Peyton wound up set up in a trap.  However, the hanging commences and as Peyton falls, the rope breaks and he is soon fleeing from death.  Strange things seem to happen to Peyton as he makes his way home, when suddenly...well, I don't want to give away the ending.  Suffice it to say, there is a twist and its a good one!

What a gripping short story! Loved the writing and found that I could not wait to see what happened to Peyton next.  As for the illustrations, they were great!  Definitely provided a clear picture of what Peyton must have been feeling as he stood over the bridge with sweat dripping down his face - fear, regret and sadness.

This story is set in Virginia and is about a young man named Carter Druse.  His loyalties are divided and tested.  Fighting for the North, Carter finds himself responsible for the death of a spy, who turns out to be someone from Carter's past.  Let me just say, I was pretty shocked by who Carter shot - it just seemed unreal and so beyond wrong.  Definitely a short story that stuns.  And the illustration of the horseman was excellent - definitely fit what I had imagined in my head. 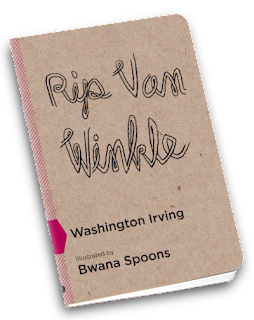 Reading this short story was great fun.  I had never read it before - I'd only heard about the tale as a kid.  Suffice it to say I wound up laughing at the craziness of it all - how this lazy man wanted to escape his nagging wife and wound up falling asleep for twenty years. Talk about avoidance issues - ha ha ha!  This was definitely a treat to read.  And I enjoyed all the illustrations by Spoons - they were whimsical and fun - a perfect fit for RipVan Winkle.

I really enjoyed these two pocket sized books of short stories and just wanted to say thanks to Scout Books for providing me with copies of the books.

By the way, if you are interested in learning more about what other short stories will be released with illustrations, just check out Scout Books.  I know I'll be heading over to that website ASAP!
Posted by Nadia at 7:42 AM
Labels: Ambrose Bierce, American Shorts, An Occurence at Owl Creek Bridge, fiction, Rip Van Winkle, Scout Books, short stories, Washington Irving

Have you ever seen the movie for Occurrence?

We studies it in film school. Great short.

Ti, no I haven't seen it, but I definitely will now. Thanks!

Frances, I agree with you about the simple design. Plus, they are pocket size, which I find nifty. Hope you check them out - they are such fun reads.