The Condition: A Novel by Jennifer Haigh 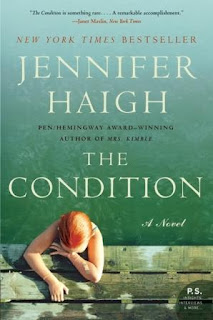 In the summer of 1976, during their annual retreat on Cape Cod, the McKotch family came apart.  Now, twenty years after daughter Gwen was diagnosed with Turner's syndrome - a rare genetic condition that keeps her trapped forever in the body of a child - eminent scientist Frank McKotch is divorced from his pedigreed wife, Paulette.  Eldest son Billy, a successful cardiologist, lives a life built on secrets and compromise.  His brother Scott awakened from a pot-addled adolescence to a soul-killing job and a regrettable marriage.  And Gwen - bright and accomplished but hermetic and emotionally aloof - spurns all social interaction until, well into her thirties, she falls in love for the first time.  With compassion and almost painful astuteness, The Condition explores the power of family mythologies - the self-delusions, denials, and inescapable truths that forever bind fathers and mothers and siblings.

Okay, so I might be the only person who didn't care much for this book, but so be it.  I've read several wonderful reviews of Haigh's other works, and so I thought that I would definitely enjoy reading The Condition.  Well, I didn't.   I just did not engage with the McKotch family at all.  They are the most superficially and stunted group of people I have ever read about.  I just didn't care for them one bit and that made it difficult to get through the book.  Now the weird thing is that I've read books where I can't stand the characters, yet I can't help but caught up in their stories.  That did not happen this time.  Instead of getting immersed in the McKotch's lives, I found myself skimming ahead and reading bits and bobs until I found a part that caught my interest.  This did not make for an enjoyable reading experience, but nonetheless I got through the book.

So, what's the book about?  Well, its about a family that falls apart one summer and what we read about is the aftermath of that break.  Years later, Frank, the father, is still obsessed with his work and still unable to connect with his children as much as he tries to with one day visits.  As for Paulette, the mother, she's now obsessed with her antiques and finding out what is happening in her children's daily lives.  The children pretty much keep to themselves.  Billy, the eldest brother, is a cardiologist living in New York with his boyfriend, a fact that he is keeping secret from his family, who have no idea that their son is gay.  Scott, the youngest sibling, is unhappy in his marriage and struggling to deal with a job he truly hates.  As for Gwen, the middle child, she is ensconced in her job at a university and avoids dating and friendships because of her Turner's syndrome, a condition she discovered she had the summer her family fell apart.  Turner's syndrome is a disease in which a person's body will not fully develop or grow - instead their body will remain like that of a child's.

All in all, a fully dysfunctional family that seems to unite during the holidays.  There are moments when the entire family is reunited and those are the most interesting sections of the book.  As for the times when I had to read all about Paulette's worries over Gwen's new beau or the fact that she lent money to her contractor (whom she crushed on) - well, those were boring times.  Her story was rather dull and predictable and I just found myself skimming through it.  Maybe that was my problem with the book - Paulette.  Perhaps, had she not been in it or been a different type of character, I might have actually enjoyed the book.  Or maybe not.  After all, Scott's story lines were rather ridiculous at times - like traveling to an island to find his sister and bring her home (even though she's an adult and is finally enjoying life and love for once).  While on the island he gets high with kids and pays off his sister's boyfriend - seriously!?

As far as the actual writing goes, it was good.  It was the storyline and weak characters that made for a rather unforgettable book.  This is definitely one book I'm happy to be done with.  Now,  I'm sure there are others who will rave about this book and find it immensely enjoyable - I'm just not one of those people.  However, I don't want to discourage anyone from reading The Condition, so here is a link to TLC Book Tours' page on Haigh's book - you can find all of the other bloggers who participated in this tour.  And the good thing is that we have all read Haigh's various works, so you will be able to find out more about her other books.  Check it out here!

I want to thank TLC Book Tours and the publisher for providing me with a copy of the book.﻿
Posted by A Bookish Way of Life at 10:05 PM
Labels: fiction, Jennifer Haigh, The Condition, TLC Book Tours

You are not alone! I didn't care for this one at all, either. Didn't connect with the characters and thought that Haigh had way too much going on in the book.

Thanks, Lisa! I thought I would be theonlyone to dislike it - so glad I'm not :)

I've read two of Haigh's other books (Mrs. Kimble and Faith), but I haven't read this one. I'm still curious about it, but your review has given me pause. Thanks for sharing!

nomadreader, I've yet to read Haigh's other works, but I'm willing to give them a try. I've heard such great things about Faith - will have to check out your review of it. As far as this one goes, it just wasn't my cup of tea. However, check out the link to the TLC page and see what others have to writ about The Condition - it may well be your cup of tea ;) Cheers!

Doesn't sound good at all. As you know, I adore dysfunction but the characters have to evolve in some way in order for it to hold my interest.

Ti, exactly! The characters have to evolve and these don't. Such a disappointing read! Oh well, on to the next book, right? :)

I did enjoy this book, but I think your assessment is quite fair. The book is certainly not carried by its plot (as I point out in my review), so if you don't connect to the characters, I can see how the book falls flat. Horribly so.

Thanks, JP! Glad you enjoyed the book, which I'm sure many other have, too. I just wasn't one of those people. I'm happy you stopped by! Cheers!

Ah well, not every book can be a great fit for every reader - to bad this one didn't work out for you.

Thanks for sharing your thoughts on this for the tour.

I've never read Haigh's work but a food friend of mine loves it. My book club will be reading Faith this summer, so I'll try that title first.

I wonder if you're in a reading slump such as I...skimnming through books and not really connecting with anything. I've enjoyed Haigh's books before, too, so it's especially sad that this one didn't work for you. Thanks for the honest review!

Heather J. thanks for letting me in on the tour. I guess they can't all be faves. Oh well.

bermudaonion, hope you enjoy Faith. I'm looking forward to your review. Maybe this one wasn't for me, but that doesn't mean her others works won't be.

Bellezza, thanks! And yes, I think I am in a reading slump - ugh! Perhaps that's why I didn't jive with Haigh's work. I've heard so many wonderful things about her writing, that I am definitely going to give another of her books a chance to change my mind on Haigh. Hopefully our reading slumps will disappear ASAP! Cheers!