This Beautiful Life: A Novel by Helen Schulman 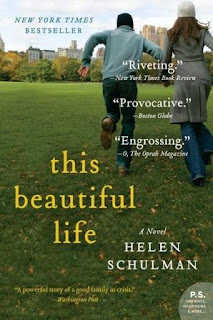 When fifteen-year-old Jake Bergamot receives - and then forwards to a friend - a sexually explicit video that an eighth-grade admirer sent to him, the video goes viral within hours.  The scandal that ensues threatens to shatter his family's sense of security and identity - and, ultimately, their happiness.  This Beautiful Life is a devastating, clear-eyed portrait of modern life that will have readers debating their assumptions about family, morality, and the choices we make in the name of love.

Worst nightmare ever! Or at least it would be, if I had children.  Okay, if I had children, it would probably be one of my worst nightmares. I mean, come on, what parent wouldn't be horrified to learn that their son had been a part of a scandal so huge that it would threaten to derail his high school career?  In fact, a scandal so provocative that it could even damage your own career aspirations, social ties and possibly cause your entire family unit to implode.  I'm actually convinced I was reading a Lifetime movie - this book was just so addictive, mesmerizing and completely chock full of drama I couldn't help but envision it being played out as a Lifetime movie (yes I do watch those - for shame)!!

So, what is the nightmare scenario?  Well, here goes:  The Bergamot family reside in New York City and are happily enjoying a life filled with career highs, slumber parties, organic foods and everything else you can imagine a family of four enjoys.  Dad is crazy-busy at work; mom is driving daughter, Coco, all over town to dance classes, doctor's appointments, and play dates; Coco is thriving at school with her gaggle of friends; and Jake is simply trying to make it through high school, all the while hoping his crush, Audrey, will finally notice him.  However, everything is about to change for this seemingly happy family of four - with the click of a button.

Jake winds up at a party being thrown by an eighth-grader named Daisy - no parents are home, alcohol flows freely and everyone who is anyone seems to be there.  (seriously, all these high school kids are hanging out with a bunch of twelve and thirteen year old kids? That just doesn't make sense to me, but then again I'm thirty-three, so what do I know of the social customs of today's youths. But I digress.)  At this party, Jake drinks and makes-out with Daisy, the hostess of the party.  Daisy is crushing hard on Jake and even tries to get him to head up to her bedroom with him, but Jake sobers up enough to realize that he shouldn't even be kissing Daisy (she's too young) and that he needs to leave this party ASAP.  He mainly sobers up, because Audrey (his crush) and several of his so-called friends have witnessed him and Daisy together and well, Jake is feeling foolish and embarrassed.  Anyhow, once at home, Jake receives an email from Daisy.  Unsure why she would email him, Jake clicks open the video she has attached and soon enough he finds himself watching Daisy in all her glory.  Shocked by what he's just seen, Jake immediately forwards the sexually explicit video to his best friend, and well, you can imagine what happens next.  Yep, the video goes viral and soon enough people from out of town are asking Jake if he's seen this crazy video with a girl named Daisy in it.  At school, boys high-five Jake and girls scowl at him - he is infamous.  As for Daisy, she's signing autographs and seems to be taking it all in stride.  However, things quickly go from up to down for Jake  when he's called into the head of the school's office.  And, this is pretty much where everything goes downhill for the entire Bergamot family.

Now, I'm not going to tell you what happens next, suffice it to say, everyone is affected by Jake's viral video.  The happy home is no longer a happy one.  Disappointment, fear, annoyance, and cabin fever ensue, along with trips to their attorney's office.  All the while you are left wondering so many things: like what are my kids really up to when I'm not around to what kind of parents' leave their thirteen year old kid home alone all the time?  Of course you also wonder, where Daisy would even get an idea to make a pornographic video from in the first place.  Plus, why would Jake send the video to anyone and not realize the repercussions that would arise as a result. Seriously! Is everyone that naive? I know they are kids, but their actions are far from child-like.  And aside from the kids, you are left to think about the role that the Internet plays in your family's life and how a tool that is supposed to be used for research or for booking plane tickets, could wind up ruining a family's livelihood.

Talk about a riveting read! Schulman has created a story so tantalizing that you can not and will not put it down until you have turned the last page!  Her writing is terrific - you are captivated from page one!  The characters are fully realized - you either hate them or empathize with them.  And the flow of the story rides high and low, just as the Bergamot's emotions go up and down.  This is one book that you do not want to miss! It is undoubtedly a must read!  I will be recommending This Beautiful Life to everyone and anyone I know.

I want to thank TLC Book Tours and the publisher for providing me with a copy of this book!
Posted by Nadia at 4:34 PM
Labels: fiction, Helen Schulman, This Beautiful Life, TLC Book Tours

I don't see how HIS life would be changed for the worse by sending such a video, but I guess that is why I have to read the book!

Oh, and my son is 13 and yes, they hang out with the high school set. Of course,he will be in high school this August but still. The 13 of today is like the 16 of when we were young.

Ti, exactly! HIS life is changed for the better (at least with the guys at school, and even some of the girls believe it or not). Its crazy reading about what these kids get up to - makes me wonder if we were just moving at a snail's pace when we were younger (although it didn't feel like it).

This sounds very much like a book I read last year, in so far as teens using technology in sexual ways only to have it wreck havoc on their lives. That one was a bit different in how it came to be. This one sounds much less contrived but both are equally frightening!

I read this and parts annoyed me, but overall, I was just so sad about how the lives of the characters changed by this act, especially the parents. I found it very difficult to read and couldn't stop thinking about how sad it was for days after

This book does sound riveting and true to life. When my son was in high school, the girls were the aggressors. Kids and cell phones with cameras can be a dangerous mix.

Lisa, which book was that? And, yes it is rather frightening how much damage having access to email can do.

Cath, there were bits that were annoying - like the way Jake handled the situation. And I completely agree with you about how sad it was to see this family fall apart as a result - it was rather heartbreaking.

bermudaonion - it is definitely true to life (unfortunately). I can believe that the girls were the aggressors - they seem to be that way now, too. And, yes kids and cell phone cameras are not a good combination - yikes!

Note to self: do not begin reading this before bed unless staying up too late is not a problem. :)

Sounds like I wouldn't be able to put this one down either!

Nadia, I don't always comment, but I do drop by.
I found one of my favorite books on your site.
Thanks for always visiting me!

The author Jane Green recently mentioned this book as one she had enjoyed this year.

I read Exposure last year - it also had a theme of "Sexting" and it's amazing to see how quickly a kid these days can derail their whole lives with a few clicks on their smartphone!

I also loved this book, but was not as happy with the ending. I also wondered about the treatment of the son at the end. Did you think his behavior toward Daisy (at the party when he rudely pushed her away from him) and toward the other girl (behind the school) foreshadowed the way he ended up after high school? Or did the author intend to say that his actions in forwarding the video and the resulting broohaha changed the way he would live out his life?

Heather, thanks for having me on the tour! And, yes this book is unputdownable!

Brenda, I'm the same way. I don't really comment much either, but I do visit your blog and jot down titles from reading it ;) I'm glad you pop in from time to time!

Booksnyc, well, I can see why Jane Green enjoyed this book, because it is definitely a good read! I'll have to check out EXPOSURE - sounds like another good one to read. It is definitely crazy how damaging using your phone can be!

Wendy, it did make me sad to see how Daisy wound up and how she viewed the entire incident. She obviously has some huge issues to deal with. As far as the son goes, I do think he will not be a good guy. Its obvious he doesn't have any respect for women, especially in the way he pushed Daisy and then treated that girl in the woods. I think he enjoyed the attention he first received from kids at school regarding the video, but didn't like the fall out at home and with regarding school(affecting college). He seems rather selfish and I think that is how he'll be later on in life. I can see how the video could change him to a degree, but considering his behavior pre-video, I'd say that is just how he is. By the by, I'm glad you stopped by. Your questions got me thinking about the book again :)