The Light of Paris: A Novel by Eleanor Brown

Madeleine is trapped - by her family's expectations, by her controlling husband, and by her own fears - in an unhappy marriage and a life she never wanted.  From the outside, it looks like she has everything, but on the inside, she fears she has nothing that matters.

In Madeleine's memories, her grandmother Margie is the kind of woman she should have been - elegant, reserved, perfect.  But when Madeleine finds a diary detailing Margie's bold, romantic trip to Jazz Age Paris, she meets the grandmother she never knew: a dreamer who defied her strict, staid family and spent an exhilarating summer writing in cafes, living on her own, and falling for a charismatic artist.

When Madeleine's marriage comes apart, she panics, escaping to her hometown and staying with her critical, disapproving mother.  In that unlikely place, shaken by the revelation of a long-hidden family secret and inspired by her grandmother's bravery, Madeleine creates her own Parisian summer - reconnecting to her love of painting, cultivating a vibrant circle of creative friends, and finding a kindred spirit in a down-to-earth chef who reminds her to feed both her body and her heart.

Through Margie's and Madeleine's stories, New York Times-bestselling author Eleanor Brown explores the joys and risks of living life on our own terms, of defying the rules that hold us back from our dreams, and of becoming the people we are meant to be.

Love, love, love! The Light of Paris is a delightful read that brings the city and spirit of Paris to life.  I absolutely enjoyed getting lost in Margie's story during her summer in 1920s Paris - it was simply captivating!  As for Madeleine's modern day story set in 1999, I found it to be a tad too predictable.  Not that Margie's isn't - believe me, it is.  Its just that Margie's story provided the backdrop of Paris, which made reading about it so much more interesting.  Who wouldn't want the opportunity to escape to Paris for a summer?  And then to find yourself set up with a job at a library where writers and bookworms stop by rather frequently - finally giving you the opportunity to chat with fellow book lovers? Plus, you meet a handsome artist who sweeps you off your feet, allowing you to experience the deliciousness of romance and young love.  Talk about a terrific story!

Madeleine is unhappy in her marriage, life, lack of career, etc.  She's a volunteer docent at an art museum; its her only connection to her one true love - art.  Yep, Madeleine is an artist, or at least she used to be.  Of course, her parents never approved and considered it more of a hobby than an actual vocation.  So, she did as was expected - went to college, joined a sorority (the one her mom was in), married an appropriate man, became a housewife, and lived unhappily ever after.  Except, she's tired of it all - the big house, not being able to eat what she wants, living side by side with a man who barely tolerates her, etc.  So, after an ugly argument with her husband, she leaves to visit her mother - a woman, who is not thrilled to see her.  Apparently, mommy dearest is selling her house and is beyond busy with getting the house ready for sale.  Plus, she doesn't like that her daughter just up and left her husband - makes her worry that all is not right in their household.  Madeleine insists that things are fine and that she just wants to help her mom.  Soon, she's making new friends, painting in the basement, and rediscovering what it is she really wants from life - all thanks to her grandmother Margie's old journals.  Turns out Margie was not so reserved and classy after all.

Margie loved to write and wanted to become a writer.  She read all the time and longed to discuss novels with friends.  Except, all her friends were married and having babies.  She was the single one, living at home with her parents.  They tried setting her up with eligible bachelors, but Margie didn't like any of them. After one disastrous marriage proposal, Margie is told she will be chaperoning her eighteen-year-old cousin on a European trip.  Say what?! Margie is shocked, but thrilled at the prospect of exploring Europe - how exciting! The only downside, her cousin Evelyn - who was a major jerk! Oh well, Margie hoped for the best and set sail with her cousin.  Except, she didn't see her cousin the whole time they cruised to France.  In fact, once in Paris, Evelyn demanded her share of spending money and told Margie that she was leaving her for the whole trip.  Aghast, Margie freaked out and told Evelyn that she was spoiled and cruel and that she would not be covering for her.  Evelyn was shocked into silence, but in the end she took all of their money and left.  Distraught, Margie didn't know what to do.  She knew she had to tell her parents what happened, but she didn't want to.  However, a chance meeting led her to find new accommodation, a job, and the courage to tell her parents she was not leaving Paris to come home.  It was the 1920s and the City of Light was in full swing - Margie didn't want to miss out on anything!  She made new friends, went dancing, ate delicious food, and engaged in a romance with a man named Sebastian.  She enjoyed her time in Paris and found happiness.  And then she lost her job and Sebastian in one fell swoop.  Forced to return home after getting sick, Margie once again found herself in her parents' clutches.  This time round she was pregnant.  Talk about scandal! Fortunately, Margie's secret was kept in the dark thanks to an old friend who proposed marriage.  He had helped Margie come home from Paris and kept an eye on her while she was sick. He found that he couldn't stop thinking about her and decided to ask for her hand - she agreed.  No one knew about her daughter's real father until Madeleine found out from her journals.  Finding out this truth made her understand her mother just a little bit more.

Madeleine agrees to return home with her husband - he shows up to bring her back home.  Once there, she tries to embrace the life of a dutiful wife and forget about her passion for art.  Except she can't.  After another ugly fight with her husband, she packs up and leaves him for good.  This time she goes home to start over.  She rents a place of her own, starts painting again, gets a job at an art store, hangs out with the friends she had made, and enjoys her living back in her hometown.  She even decides to go on a trip to Paris - she figures its the right thing to do after reading her grandmother's journals.  Madeleine is going to follow the The Light of Paris in this new path of self-discovery.  How exciting, eh?  I only wish we could have read about Madeleine in Paris and seen the city through her eyes.

The Light of Paris is a wonderful story about two women struggling to figure out what they want from life.  They let fear dictate what they should and shouldn't do, along with allowing the people who love them rule.  Its fascinating, heartbreaking, and utterly addicting to read. I could not put the book down! I absolutely loved Eleanor Brown's writing and storytelling prowess.  Her characters were realistic and flawed.  And the two story lines were filled with hope and heart. I just loved the book to bits!  Plus, I'm a sucker for anything to do with Paris. 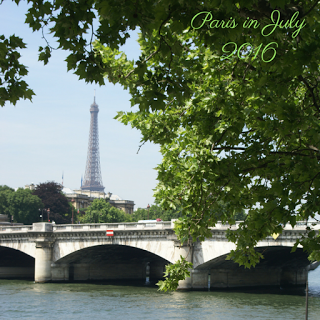 Posted by A Bookish Way of Life at 10:45 AM
Labels: 2016, Eleanor Brown, fiction, novel, Paris, Paris in July, The Light of Paris, Women's Fiction

I'd probably want to just read the chapters set in Paris and skip the rest...I love Paris. :)

Oh my, this sounds fabulous!

This sounds good. Where is the Madeleine section set? I've already reserved it.

My mother read my copy first, I've been trying to read for Spanish Lit Month, too, and she thought this a rather formulaic book. I'm encouraged that there are many parts you liked, and I can only imagine how glorious the backdrop of Paris will be. When I get to it. Thanks for reviewing it for us, for Paris in July!

Paulita, its takes place in a town called Magnolia, which is between Memphis and Little Rock. Let me know what you think once you've read it :)

M, your mom is right - its definitely formulaic, but what book isn't lately? I just really enjoyed it, especially Margie's section when she's living in Paris - who doesn't want to read about Paris in the 20s?

I wished that Madeleine had been a little less passive - I know she's only seen wives that stand by their man but damn that Phillip was abusive! Oh wait, of course that's why she was so passive! Otherwise, this was just the right book to take my mind off all of the stuff going on in the world today.

Lisa, I know what you mean. I agree, she was too agreeable with everyone and didn't really seem to have a backbone. I hated that about her character. And yes, Phillip was horrible and so abusive towards her. I didn't get why she couldn't leave him. It was frustrating to read. Her mom was pretty awful as well - ugh! Madeleine was an adult - she could have gotten a job and paid her own way - who cares what anyone would think if she left her crappy husband! I'm with you, this book was perfect for distracting me from the real world for a few hours - just what I needed :)