Final Film for Paris in July 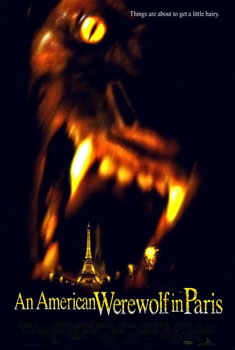 Paris in July is about to end and to cap it off, so I decided to watch a funny and rather ridiculous film called, An American Werewolf in Paris.  Starring Julie Delpy and Tom Everett Scott, this film follows a group of American guys visiting Paris for the first time, who somehow manage to befriend a group of werewolves.  And, I'm talking about the werewolves that eat people.  Sounds pretty crazy, right?  Well it absolutely is and that is precisely why I enjoyed watching this movie so much.

I hadn't seen this film since it came out during my sophomore year in college and re-watching it made me realize that I had really bad taste in films when I was younger.  I'm utterly serious.  This film is chock full of stereotypical, under-developed characters, over the top antics, and werewolves - how does that not equate to a bad movie?  But I loved it all.  Especially, getting to see Paris in the background and laughing at the absurdity of this film.  It was such a fun treat to watch - it really made a depressingly grey rainy day much more bearable.  Plus, it made for such a blast from the past experience that I was in nostalgia mode for the rest of the day.  I actually listened to my old Bush CDs and sang aloud to the songs at top volume.  Crikey, I loved that band.

All in all, the film was a fun diversion that brightened my day.  Of course, any chance to see Paris is fun - even if it is via an old, cheesy film like An American Werewolf in Paris.  As for Paris in July,  I truly enjoyed reading everyone's posts this year - they are as always, a delight to read.   And now, I'm off to read me some more short stories by KV (Kurt Vonnegut) - I'm in the middle of Look At The Birdie and absolutely LOVING it!  Au Revoir!
Posted by A Bookish Way of Life at 7:04 PM
Labels: 2014, An American Werewolf in Paris, film, Paris in July

I can only vaguely remember seeing this one - it must have been something we rented then started watching too late at night for me to retain!

Lisa, it is such a hilariously bad movie that I love to watch it. Sometimes those are so good for a laugh. I can definitely understand forgetting about it :)