Glamorama.  Bret Easton Ellis has once again hooked me with his storytelling prowess.  Victor is seriously the worst.  He's a male model who is obsessed with his looks, hanging out with the who's who of the celebrity world, and pretty much living his life in a fog.  I've barely started the book and can already tell I'm going to hate Victor.  And yet, I want to read all about him.  This book is vintage Ellis.  Its clever, vicious, and hilarious.  All the name-dropping makes my head spin at times, but I can easily imagine these 'celebrity' models talking/thinking in such a manner.  Oh, and the nineties music and pop culture that drips from the pages is terrific - brings back so many memories. I am seriously crushing so hard on this book. In fact, I'm wondering why I waited so long to read it. 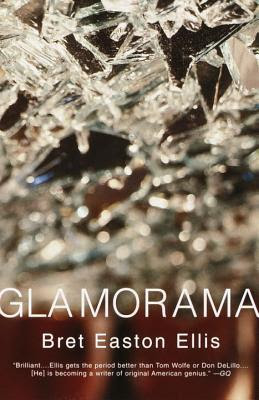 American Horror Story: Roanoke.  What the what?!  This season is strange, twisted, creepy, and different. Its a show within a show within a show, or something like that. Right now the show is in 'season 2' and everyone is dead, except for one person.  I don't know why I was surprised she survived, considering she used to be a cop.  Now, I'm just wondering how the season will end.  I will admit that this season hasn't been all that great.  I've found some of the story lines ridiculous and can't help but wonder what Murphy was thinking.  I feel like the buildup to this season was more excited than the actual show.

The Walking Dead.  Daryl is in hell.  Dwight's story was revealed.  Negan is still Negan.  Last week's episode showed us what life at the Sanctuary was like for Negan's saviors.  Apparently, Dwight's role in Negan's world allows him to take whatever he wants.  He's also in charge of breaking Daryl.  We learn that Dwight and his family left the Sanctuary, but came back.  As a result of this malfeasance, Negan was going to kill Dwight.  However, Sherry (Dwight's wife) stopped Negan by offering herself to him.  She's now 'married' to Negan.  Of course, Negan just loves throwing his relationship with Sherry in Dwight's face.  This back story is supposed to make up feel badly for Dwight.  It didn't work for me. I don't care for Dwight at all. I hated when he gave Daryl the photo of Glenn with his head smashed in.  I know why he did it, but it only made me dislike him even more. I just hope that Daryl gets reunited with his crew soon. Looks like this upcoming episode has Negan heading to Alexandria.  I can't wait to find out how Rick and the gang are faring after their encounter with Negan.  I really hope they are plotting revenge. I want to see Rick show Negan that he's not afraid.  Not sure that will happen so soon in the season though.

London Review of Books.  I'm really enjoying my subscription to this literary magazine.  I love the content - its smart, fresh, and thought-provoking.  There are essays, criticisms, poems, etc.  I find myself dipping in and out of it throughout the week.  I love the way it affects me - making me want to read even more.  I have a new list of books that I now want/need to read, because of the LRB.  I signed up on a whim and now I'm so happy that I did. I'm thinking of subscribing to Granta now, too. What do you think? What literary magazines do you read? Which do you recommend? 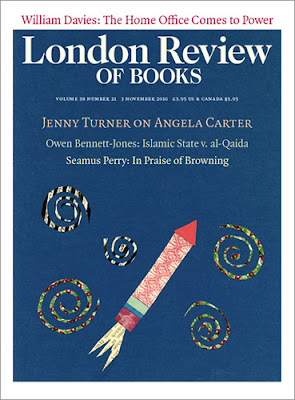 The election.  Its over and done.  America has voted (or not) for their new President and so it goes... I am beyond sad that HRC didn't win. I have grudgingly accepted that Trump won. I am trying to remain optimistic, although watching the news makes it hard.  My family, friends and I have all experienced  racism and sexism over the years, so all of these news reports about what is happening is not new to me.  Its always happened.  This is our America.

And now, I will be listening to Hamilton on repeat. I need some inspiring music to cheer me up.
Posted by A Bookish Way of Life at 5:10 AM
Labels: Bookish and Non-Bookish Thoughts, books, election, literary magazines, random, TV

It wasn't the outcome I was hoping for, either. It's sad, and I hope the country can tolerate this new change without things getting worse. Kinda scares me, honestly. I'm just going to try to stay optimistic and live in my happy bubble as long as I can!

I hope you have a great weekend, Nadia!

Brandie, me too. I'm going to try and stay optimistic and live in my own happy bubble :) Hope you have a great weekend!!

I'm also looking forward to Rick telling Negan what's up, although it might have to be someone else that tells him first. Good guys need a win this week!

Katie, I know! I hate seeing Rick and his gang defeated. They need to do something to show us that they are still willing to fight back. Can't wait for Sunday!

I don't know Hamilton's music, nor Bret Easton Ellis' writing; what a rock has covered me! I'm glad they offer you respite, though. xo

I'm not there yet with the accepting...and with those whose side won throwing Hamilton in my face when they defend the Electoral College, I can't even fall back to the musical

M, the Hamilton I'm referring to is the Broadway Musical that EVERYONE seems to LOVE. I love it, too. The music is smart and fresh. As for Ellis - his writing is exciting. I really enjoy how he manages to capture a culture and a generation so well. Right now I'm reliving the 90s as I read his book and I'm loving it. Thanks :)

Lisa, I have to admit its hard to accept. In fact, sometimes I feel like I haven't. Its hard to watch people walking around with their Trump hats on and smiling so happily. And the news just gets me even more upset. I just try to accept it, so that I can move forward. Its not easy at all. And I can see your point about Hamilton. When I listen to it, I think of Lin Manuel Miranda and how crazy smart he is and how tirelessly he worked to create such an exciting musical. It inspires me and so I keep listening to it. For some reason his musical gives me hope. And like I said, its not easy to accept Trump as President, but that's our reality. Its a strange time, for sure.